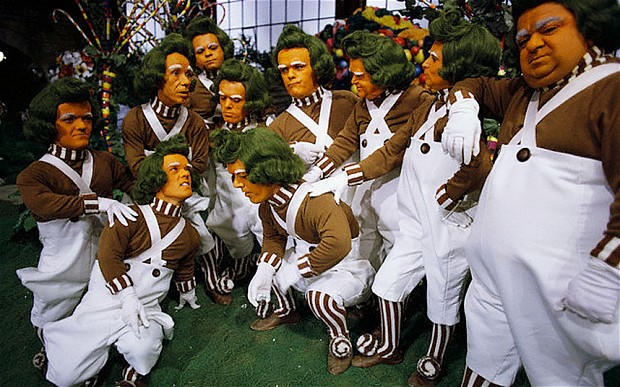 The Oompa-Loompas are considered to be hard working and are no taller than a child. According to Willy Wonka himself, Oompa-Loompas are no larger than medium sized dolls. Originating from Loompaland, these rosy white skinned and golden-brown haired hard workers have a knack for singing quite well. In addition to their singing ability, Willy Wonka also describes them as mischievous and lovers of dancing and music. Despite the fact that some individuals may find the Oompa-Loompa character interesting along with its characteristics, Jeremy Treglown thinks they portray something different. Presented in one of Treglown’s articles, "Roald Dahl: A Biography", the Oompa-Loompas were characterized as African pygmies who were imported by the owner of the fictional chocolate factory, Willy Wonka. Treglown compared the two even further by describing the similar characteristics such as singing while working. Some may find Treglown’s analysis on the story of Charlie and the Chocolate Factory a bit drastic, and some may agree with his perspective. Those who find Treglown’s analysis convincing might believe that racist undertones are present in the Oompa-Loompa character. For example, in Treglown’s article, he describes the height of both African pygmies and Oompa-Loompas. The average height of an African pygmy is usually below 4 feet 11 inches. Although there is not an actual height given for Oompa Loompas, Willy Wonka has described them to be no larger than medium sized dolls. Another similarity is their vocal music. Pygmy culture is particularly known for vocal music. Oompa-Loompas, according to Willy Wonka, are quite accomplished with vocal music as well. Their songs and lyrics are made up on the spot and are usually quite witty. Despite being iconic in the Chocolate Factory fairy tale, the Oompa Loompas have become controversial characters due to growing criticisms.  </p>

Retrieved from "https://fictspedia.fandom.com/wiki/The_Oompa_Loompa_Controversy?oldid=12944"
Community content is available under CC-BY-SA unless otherwise noted.